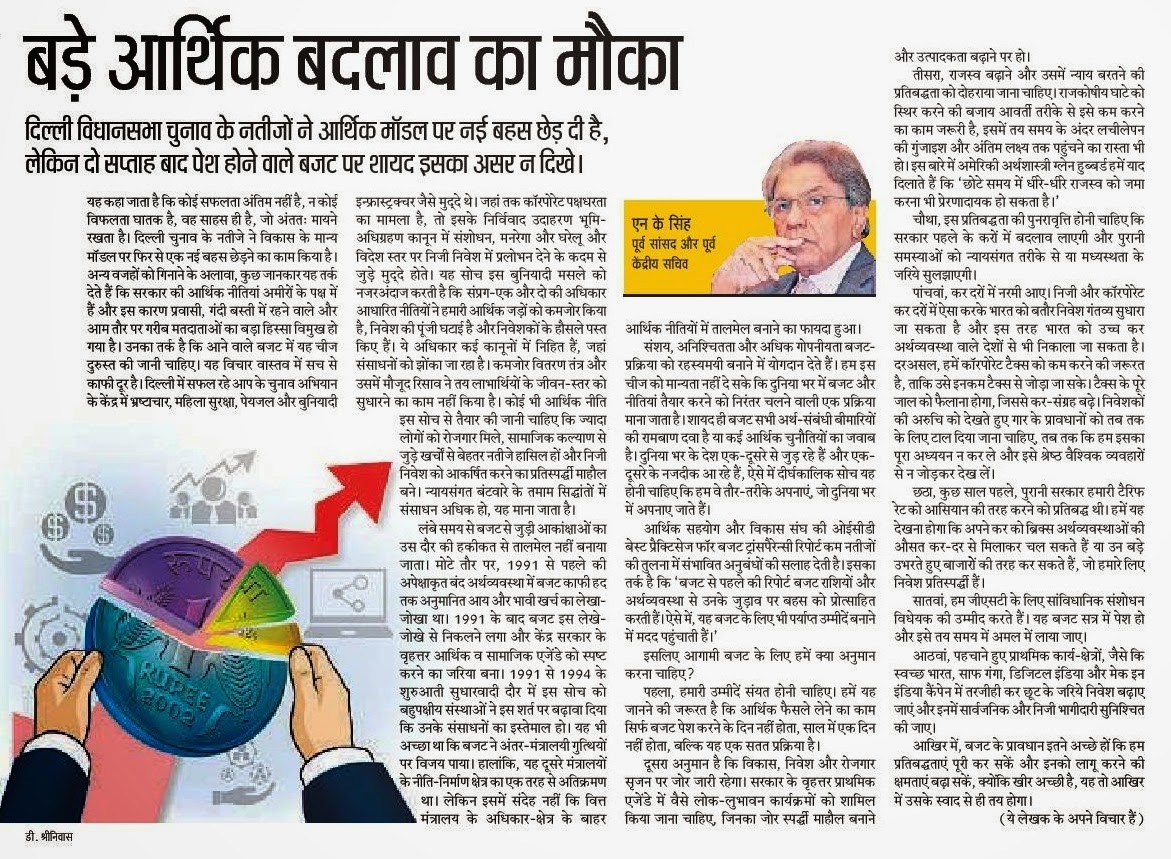 Money-wise: A budget is as good as our implementation capabilities

It is said that no success is final, nor failure fatal — it is the courage to continue that counts.
The Delhi electoral outcome has rekindled a fresh debate on the preferred model of development. Apart from other factors some analysts argue that the economic policies of the government have a pro-rich bias and alienated a large voter base among migrants, slum-dwellers and, generally, the very poor. The forthcoming budget, they argue, must course correct. This reasoning is truly farfetched. The focus of the election campaign by AAP related to issues of corruption, safety of women, availability of drinking water and inadequacy of basic infrastructure. Critics overlook that the amendment to the Land Acquisition Act pertains to the ponderousness of the process and does not dilute the generous compensation. Similarly, with respect to the MGNREGA based on CAG report the emphasis rightly has been placed on capital-creating assets. The approach also overlooks the more basic fact that the excessively entitlement-driven policies of UPA 1 and UPA 2 weakened macro fundamentals, reduced investable surpluses and smothered investor confidence. These entitlement-driven rights embedded in several legislations were a major draft on shrinking resources. Coupled with weak delivery systems with inherent leakages they eluded improved life quality to intended beneficiaries. Any economic strategy must be designed to create more jobs, improve outcomes of social spending, quality of infrastructure and improve competitive viability to attract private investments.
All principles of distributive justice are predicated on enlarging the size of the cake. The reverse is a vicious quagmire of a low-level equilibrium trap.
For too long budget expectations remain misaligned with contemporary realities. Broadly speaking, in a comparatively closed economy prior to 1991, the budget was predominantly an accounting statement of projected revenues and intended expenditures. Post 1991, the budget increasingly becomes an occasion to go beyond accounting and articulate the broader economic and social agenda of the government. This approach in the earlier reform period of 1991 to 1994 was fostered by multilateral institutions as a pre-condition for access to their resources.
Speculation, uncertainty and excessive secrecy contribute to the mystique of the budget process. It is not adequately recognised that all over the world economic policy-making is a continuous process. The budget is hardly a panacea for either all economic malaise or response to multiple economic challenges. In an increasingly inter-dependent world we need to adopt the best international practice in the budgetary process. The OECD Best Practices for Budget Transparency report has suggested an ex-ante engagement than ex-post outcomes. It argues that ‘a pre-budget report serves to encourage debate on the budget aggregates and how they interact with the economy. As such, it also serves to create appropriate expectations for the budget itself.’ British economist John Maynard Keynes suggests “Successful investing is anticipating the anticipations of others.”
So what should we anticipate for the forthcoming budget?
First, continue the focus on growth, investments and employment creation. Distractions and plea for populist programmes must be subsumed as part of the broader priority agenda of the government, which focuses on externalities, public goods, enhancing our competitive viability and total factor productivity of the economy.
Second, both savings and the investment rates and investment gearing ratio need to substantially increase for transiting to a higher growth trajectory.
Third, reiterating the commitment to fiscal rectitude and the path of fiscal consolidation. Mechanical fixation of fiscal deficit should be replaced by cyclically adjusted fiscal deficit with latitude to reach end targets with flexibility during the intervening period. The concept of cyclically adjusted fiscal deficits now has wide acceptance. As Glenn Hubbard, dean of the Columbia University Graduate School of Business, reminds us, “Gradual fiscal consolidation may also be stimulative in the short run.”

Fourth, improved expenditure management, reduction in the number of centrally-sponsored schemes and given reported generous award of the finance commission coupled with subsidy rationalisation, particularly direct benefit transfer, benefit macro management.
Fifth, a reiteration of abstinence for future retrospective changes and acceptance of judicial or quasi judicial or arbitration outcomes improves investor confidence.
Sixth, lowering tax rates to improve opportunity cost of investment and enlarging the base with a commitment to align our taxation rates with Asean rates will be an important investor fillip. Adopting best international practice in respect of treaty shopping, seeking tax arbitrage, base erosion and profit sharing and application of GAAR can be part of the same process.
Seventh, clearly-identified programmes that are popular but not populist and contribute to inclusive growth, like Jan Dhan, Swachh Bharat, Clean Ganga, the Digital India and Make in India campaigns should receive tax incentives to invigorate green shoots of investments and back-end infrastructure. Improving the ease of business, particularly enforcements of contracts and permissions in the construction sector as high priority, can make a difference.
Eighth, enhancing agricultural productivity, particularly supply side response, in consonance with changing consumer preference along with orderly non-agricultural job creation is important.
Improved social infrastructure, particularly health and education need an innovative approach. In education, the key issue of guaranteed access must be replaced by improved outcome, through teacher training, and undoing the debilitating feature of the RTE, which has smothered private initiative, is critical. This would be congruous to the new skill inculcation initiatives both in respect of rejuvenating existing institutions and creating new ones.
In the end, any budget is as good as our implementation capabilities. John Keats was right when he said “Nothing ever becomes real till it is experienced”.
Posted by N.K. Singh at 22:21 No comments:

India: The Economy of Future

The last ten days have been packed with events. Just prior to the visit of Obama the World Economic Forum in Davos concluded its 45th annual conference of the broad theme entitled ‘The New Global Context’.
This was my 17th year in the Alpine Ski Resort in Switzerland. Davos is much more than mere animated discussions ranging from the economy to politics to medicines to arts and sciences. It manages to get each successive year to engage key policy makers and game changers. The slogan is ‘Come to Davos and meet the world of Game Changers’. At the heart of it, Davos is less about meeting but more about making friends, to nexus, to connect and to leverage contacts. You need a ‘Davos Frame of Mind’ to make the best of Davos.

Are there multiplier benefits to friendship and contacts even in an interdependent world today? Yes it is, because with face to face contacts, even brief conversation is a quick learning experience about changes, perceptions and pointers to future.

The Davos conference this year had a mixed milieu. The European delegation seemed concerned about the future of Europe and given the uncertainties in Greece and vulnerabilities of some other countries. The future of euro zone remains a question mark. Russia was struggling to keep its head above water since ruble has collapsed; oil revenues were half with rising fiscal deficit, a credit down grade with persistent foreign capital outflows. So between the uncertainties of Euro Zone and Russia, Europe remains in doldrums, if not in turmoil.

The US recovery is robust with employment figures looking optimistic even though there is uncertainty on how quickly interest rates would rise and quantitative easing wound down. In Latin America there were patches of good and bad - Brazil remains sluggish. In Asia, the Chinese economy has slowed down, partly a result of a conscious policy to ease overheating and move economic activity towards low fossil fuel use. The return of Abe and relentless pursuit of Abenomics by way of quantitative easing has yet to reverse the slowdown. In Africa, the South African economy remains sluggish and the falling commodity prices has upset many African economies. India remains in notable exception and indeed as the eminent economist Laura Tyson said in Davos, India is a high point in the short run but now importantly the economy of the future.

India in Davos has always passed through oscillations. Prior to 1991, when Davos was much smaller, India was viewed as a closed economy which discouraged foreign investment and was viewed merely as a potential market for exports of plant and technology. The reforms of 1991 brought about a major shift when the opening up of the Indian economy enthused the world as new opportunities opened. This continued for several years. However, it was during the NDA government under the leadership of Atal Vihari Vyajpayee, the opening up of the telecom sector and massive highway building programmes had Davos excited about the New India opportunity. The acceleration of the growth rate, particularly in 2007-08 continued the India fever. However, the five years of the UPA-II government dashed their expectations. India slipped from global investor radar. The sluggish growth rates of sub 5 percent over the past few years with controversial retrospective tax changes enhanced perception of governance paralysis, lack of transparency, financial malfeasance and crony capitalism; people felt it was a country which had gone back in time.

All this has changed quickly in the last seven months.

The panel discussions in which Arun Jaitely participated and some in which Piyush Goyal did, were the most sought after meetings in Davos. Arun Jaitely’s CII breakfast meeting under the aegis of Boston Consulting Group had a packed and enthusiastic crowding. Equally Mr. Jaitely’s one on one conversation with a correspondent of New York Times had an enthusiastic response with informed questions from the audience. His televised debate on the BRICS agenda was moderated by Silio Boccanera in which participants included Carlos Ghosn(Chairman, CEO Renault Nissan),  Justin Lin(Professor at Peking University, China) and Nhlanhla Musa Nene (Finance Minister of South Africa. Similarly, the well attended NDTV debate on the Future of India had Chanda Kochar, Nouriel Roubini, Vikram Chadra with Arun Jaitely.

My broad conclusions on India at Davos would include the following four points.
Davos 2015 marks the rekindling of global hope and expectation about the India story. The world hopes this would not be yet another false dawn. We hope so too.
Posted by N.K. Singh at 23:33 No comments: